Northern League kicks off with a Win. 23 June 2022
The weather was fine, and the magnificent setting, Downham Croquet Club in the grounds of Stow Hall, was appreciated, as was lunch at The Hare. Our team of Adrian Kirby, Ian Lines and Debbie Lines defeated the Downham Market team, Ian Thompson, David Haslam, and Colin Spencer 4:0. The results in detail
Golf Croquet C-Level Series Tournament. 31 May 2022
On a day where the least consistent thing was the weather, the competitors met for the first ever Golf Croquet tournament at the club. The rain came and went but we did have some sunshine. The organisation and catering were excellent, as was the company, and everyone seemed to enjoy themselves when the weather allowed. With the weather fluctuating the speed of the lawns varied on an ongoing basis, which was challenging, particularly at the end when the sun sped up the lawns. The event was organised as two blocks, with the winner and runner up from each block going into a two round knockout for the places. Congratulations to Colin Spencer (front and centre below, holding the trophy) who won the final, dominating at the start and end of the match mainly through consistently well weighted shots that put his opponent, Stephen Cornelius (far left below) under consistent pressure. The results in detail 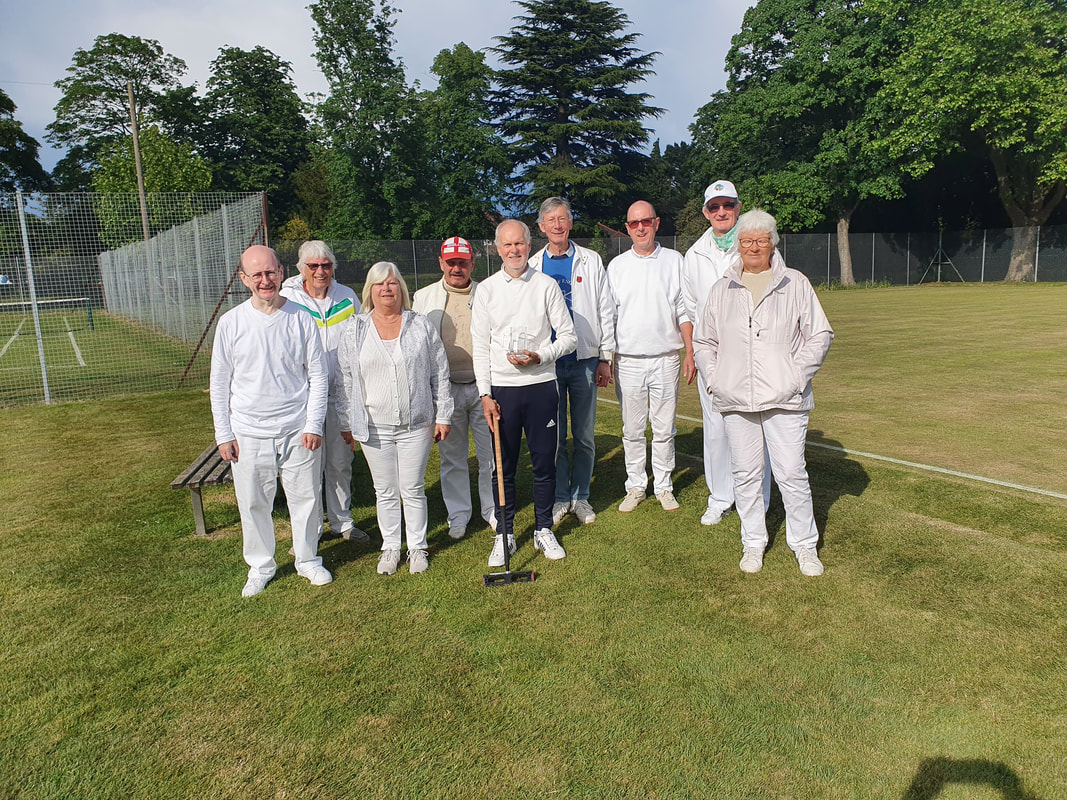 NEEN beats NENN
With the pronunciation of the Nene Challenge at stake Northhampton and Peterborough faced off at the club on 12th May.
​
The weather was exceptionally kind, the lawns were playing pretty well for so early in our season, and the format worked well. Playing 19 hoops, instead of the usual 13, on the GC court - (actually, First-to-10 'Advantage GC') -  while also playing 14-point games on the AC court, achieved its purpose of avoiding having the GC games finishing well before the AC ones.

As it transpired, in AC the home team proved too strong for the visitors, but in GC there was an extraordinary series of nail-biting close finishes, so it was the GC games that lasted longer more often than not.

If more of those close finishes had gone Northampton's way, the overall result would have been very different, so the 11:1 final score certainly doesn't reflect the Northampton team's true standard of play. 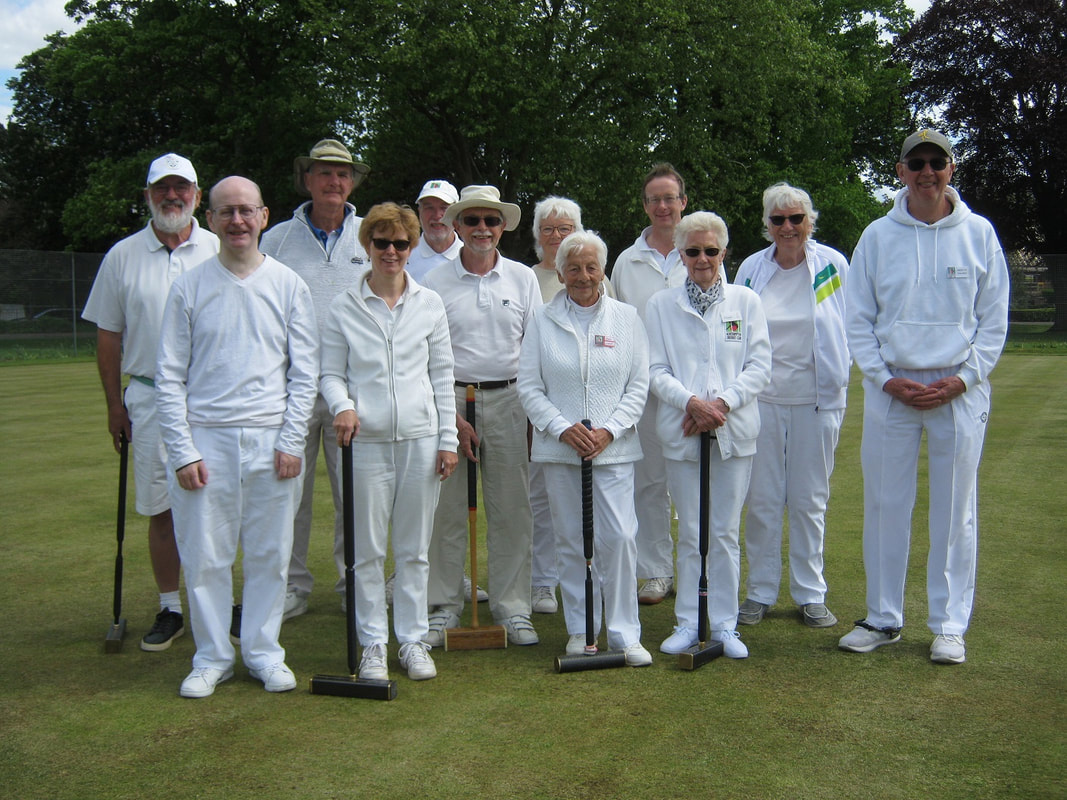 In the doubles (with Stephen Cornelius) Debbie made an 8-hoop break as time approached to go two up, and though Jonathan Toye hit in and managed to get position he missed a long hoop. Peterborough won 16-14.

In Stephen's singles, he made a 7-hoop break as time approached to tie the game, and though Colin hit in he failed to get position and left Stephen an easy 'golden hoop' finish. Stephen was conceding 9 bisques; he played patiently and - at the end - very well to win 18-17. 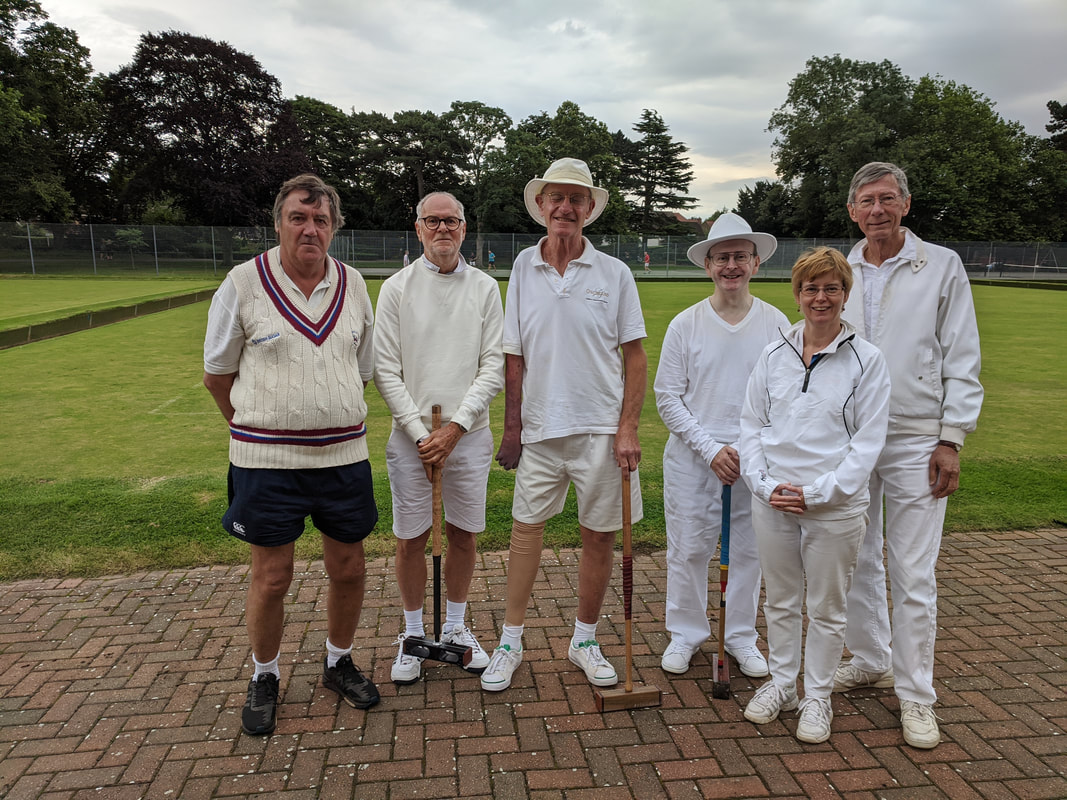 ​The Nene/Nene Challenge – Sunset on Neen for a Year. 17 May 2021
Yesterday Peterborough and Northampton Croquet Clubs faced off in the grudge match of the year naming rights for the River Nene. Peterborough and Northampton have always had a friendly rivalry both sitting on the river Nene but both pronouncing it differently the Northampton ‘Nen’ or the Peterborough ‘Neen’. How better to settle such controversy than in the gladiatorial arena of sport.
Northampton ran out worthy winner seven games to two although in fact Peterborough scored 55% of the total hoops ran on the day and had the satisfaction of at least seeing the battle of the Paul’s won decisively in their favour +20.
As a result Northampton take home the trophy a picture of the sun setting over the Nene and for one year at least it will be sunset on the name Neen.
Paul Hetherington, Peterborough Club Secretary said. “This local challenge was a great way to celebrate a new season of croquet and a chance to forge new friendships along the river. Peterborough needs you to join our Club and ensure that next year we can win back naming rights to the river.
Paul Chard, Northampton Club Chairman responded. “Our team pulled out all the stops to win the match and then the two teams mingled in friendly competition. It was a great day with fine weather. I would urge people to join the winners by becoming members of Northampton Croquet Club”
Full Results (Peterborough names first as the home team)
Association Croquet
Adrian Kirby and Paul Hetherington lost to James Skelton and Paul Chard 21-26
Adrian Kirby beat James Skelton 26-2 (including a triple peel)
Paul Hetherington beat Paul Chard 26-6
Golf Croquet
Lynne Simpson lost to Rita Brocket 2-7
Roz Wright and Sarah Thornhill lost to Ann Udah and Martyn Palmer 3-7
Sarah Thornhill lost to Martyn Palmer 1-7
Roz Wright and Lynne Simpson lost to Ann Udah and Rita Brocket 5-7
Roz Wright lost to Ann Udah 5-7
Sarah Thornhill and Lynne Simpson lost to Martyn Palmer and Rita Brocket 5-7 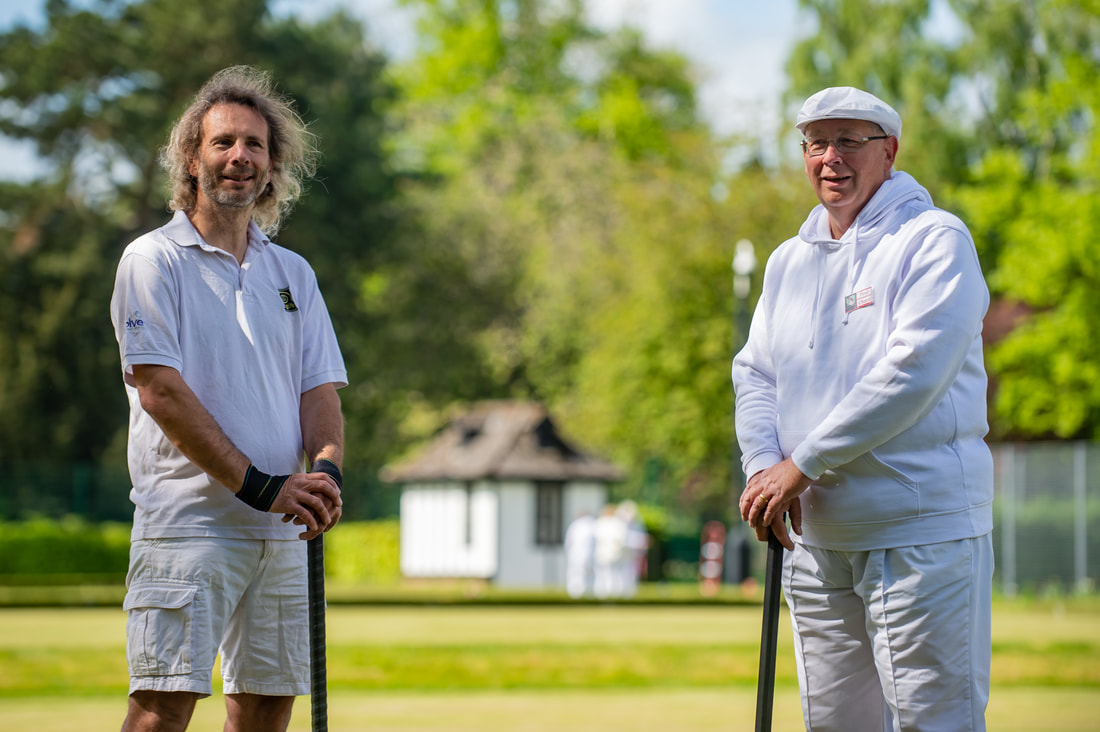 The Nene/Nene Challenge. 13 May 2021
Peterborough and Northampton have always had a friendly rivalry both sitting on the river Nene but both pronouncing it differently the Northampton ‘Nen’ or the Peterborough ‘Neen’. How better to settle such controversy than in the gladiatorial arena of sport. Peterborough and Northampton Croquet Clubs will battle out a best of nine games match across two codes on Sunday 16th May in Central Park, Peterborough for the right to decide where the pronunciation ends. A nine nil whitewash would require the losers to adopt the winners pronunciation for the year a close result might see Oundle the turning point.

Paul Hetherington, Peterborough Club Secretary said. “This local challenge is a great start to our season as we look to throw off the shackles of Covid rest assured our whole team of five will be playing hard to preserve the name of our Nene”.
​
Paul Chard, Northampton Club Chairman responded. “Our five person team  will look to wrest the match from Peterborough game by game as we too look forward to a productive season growing our club and promoting the Nene.” 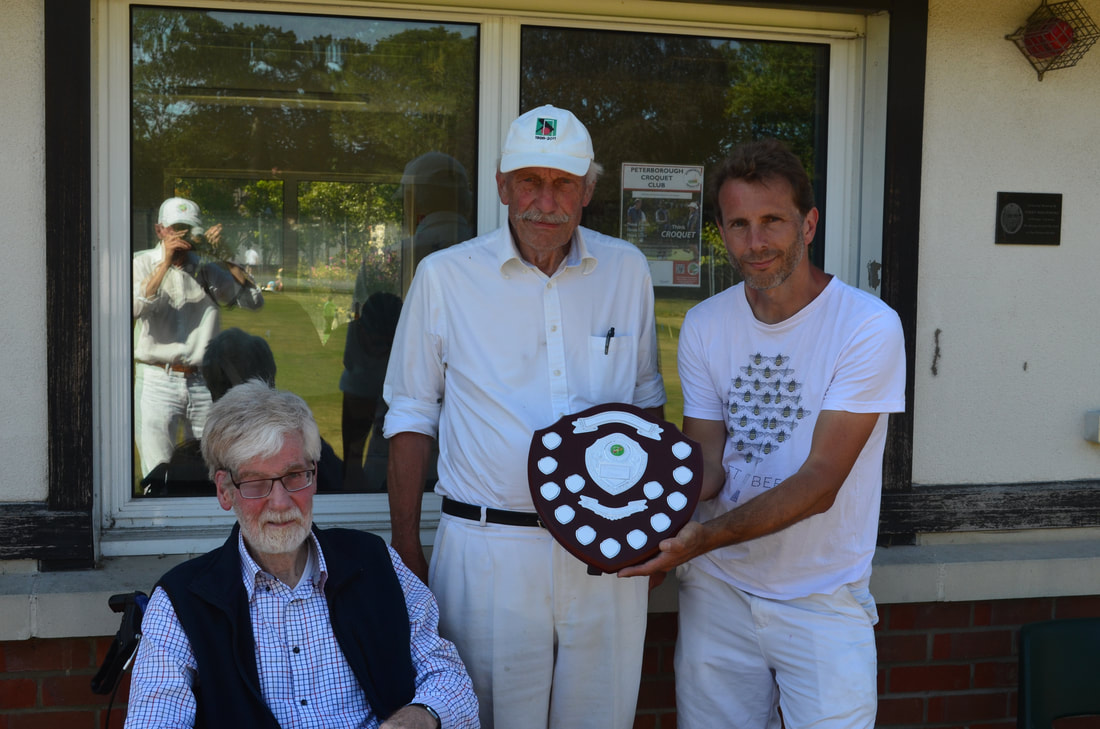 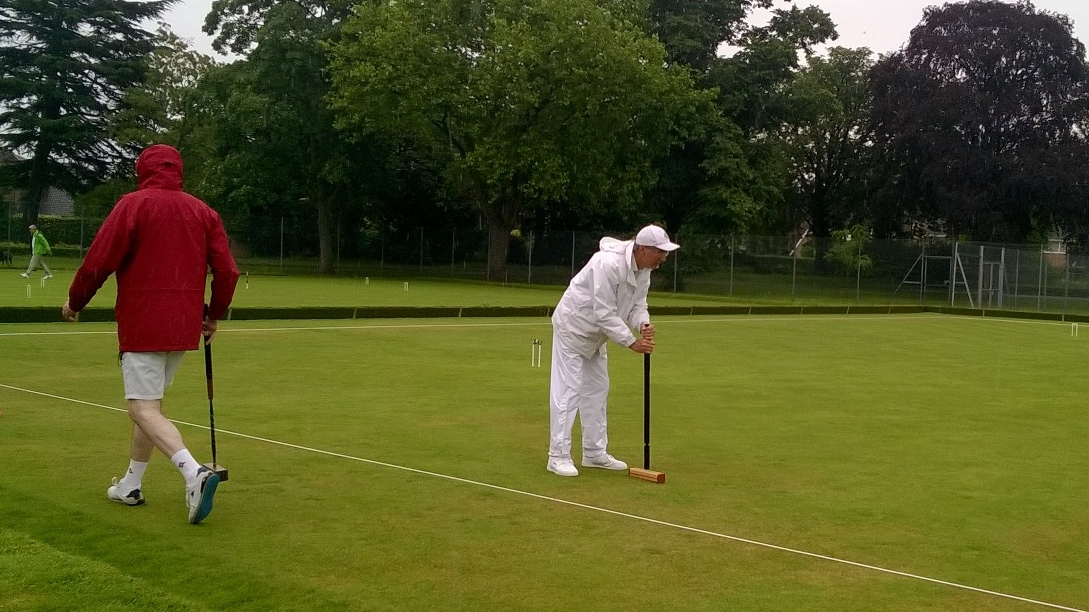 Following the success of tournaments in 2016 and 207 the Club will be hosting two tournaments in 2018 the first a handicap tournament to be managed in June by Paul Hetherington to be followed in July by an Advanced Tournament managed by Adrian Kirby.